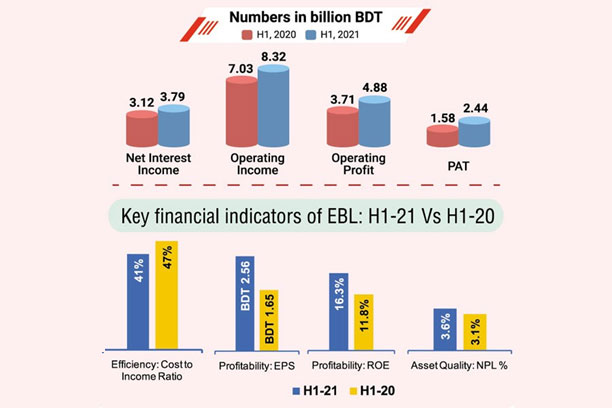 Eastern Bank Limited (EBL) has continued to strike a balance between liquidity, profitability and solvency to post a positive growth in the first half (H1) of 2021 calendar year.

The private commercial bank (PCB) has shown this performance when the overall financial sector is struggling with rising default loans, shortfall of provision and capital, shrinking profitability, operating inefficiency and weak governance.

EBL’s strong focus on asset quality has driven it to achieve low non-performing loans (NPLs) of 3.60 per cent at the end of June 2021. The bank's NPL percentage is far below the industry average of more than 8.0 per cent, the bank’s data showed.

However, its net NPL ratio, which is measured by netting off specific provision and interest suspense from NPL, was 1.27 per cent at June end 2021.

EBL has also kept excess provision of Tk 1.79 billion (Tk 179 crore) in addition to classified loans requirement for strengthening shock absorbing capacity under stressed scenarios resulting in NPLs coverage ratio of 143 per cent during the period under review.

The PCB’s cost to income ratio, a measure of operating efficiency, improved significantly in the first six months of this year to 41 per cent from 47 per cent in the same period of 2020.

Cost to income ratio improved due mostly to higher operating income growth of 18 per cent, driven mainly by 21 per cent growth of net interest income, in H1 of 2021 than operating expense growth of 4.0 per cent over those of the same period of the previous calendar year.

EBL reported profit after tax per employee, a measure of productivity, at Tk 1.30 million (Tk 13 lac) in 2020, one of the highest among peers.

EBL’s intrinsic and relative financial strength is largely a result of its solvency (indicated by its shock absorption capacity relative to its risk) and its liquidity, according to senior executives of the bank.

Meanwhile, EBL has been able to manage all the major regulatory liquidity ratios during the period. The second generation PCB maintained liquidity coverage ratio (LCR) at 143.10 per cent as against minimum requirement at 100 per cent in H1 of 2021.

Besides, the advance-deposit ratio (ADR) of EBL stood at nearly 80 per cent during the period against the regulatory maximum ceiling of 87 per cent, meaning EBL has still room to grow as far as ADR ratio is concerned.

The central bank of Bangladesh had earlier set the safe limit of ADR at 87 per cent for conventional banks and at 92 per cent for Shariah-based Islamic banks.

Though EBL posted positive cash flow of Tk 1.87 billion (Tk 187 crore) from profit and loss (P&L) items in the first half of 2021, cash flow from operating activities was negative by Tk 8.83 billion (Tk 883 crore) since asset growth was funded mostly by borrowing.

However, positive cash flow of Tk 1.87 billion (Tk 187 crore) from P&L items indicates that the sum of interest receipt, fees and commission receipt, capital gain and dividend receipt was higher than the amount of interest payment, overhead and other operating expense plus tax payment during the period under review.

About negative cash flow, Mr. Iftekhar said: “EBL in its history has never been in a liquidity crunch. Our strong retail presence as one of the leading banks, access to development funds provided by Bangladesh Bank and development financiers, partially offsets funding risks.”

In the first half of 2021, EBL followed a cautious business growth strategy with the focus on alternative investment where credit risk and provision requirement are low.

“This balanced growth has generated positive returns for the stakeholders,” a senior executive of the bank noted.

EBL continues to maximise wealth for its shareholders by improving return on asset (ROA) to 1.40 per cent in the first six months of this year from 0.92 per cent a year before while return on equity (ROE) rose to 16.29 per cent from 11.78 per cent.

EBL has, meanwhile, declared 35 per cent dividend for the year 2020 to the shareholders, which is the highest in the industry.

Eastern Bank Limited (EBL) has been honoured for its significant contribution in achieving the target (Tk 240 billion) for 2020-2021, set for the Large Taxpayer Unit (LTU).

Bangladesh's top trade body yesterday urged banks to take actions against the wilful loan defaulters to bring down the amount of bad loans.