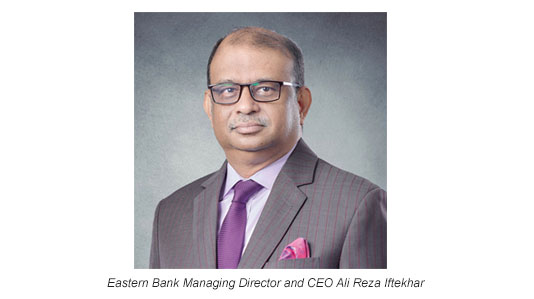 Eastern Bank Limited (EBL) has been able to forge ahead, maintaining consistency in its business and financial performance during the first half (H1) of 2020, amid all the threats posed by the unprecedented Covid-19 pandemic.

Riding on prudent balance sheet management, the bank recorded positive growth in profit after tax with Tk155 crore (solo basis) in this period despite the implementation of a nine percent lending rate cap, except for credit cards, from April 1 this year.

EBL has been able to comply with all the critical liquidity and solvency ratios amid this pandemic.

The bank's advance to deposit ratio was 77.91 percent in June this year–well within the threshold of 87 percent.

Ali Reza Iftekhar, managing director and chief executive officer (CEO) of Eastern Bank, told The Business Standard the Covid-19 pandemic caught the whole nation off-guard at the beginning of this year and had a cascading effect on the banking sector.

"Moreover, the lending rate capping has placed the banking sector in an awkward situation. The average revenue of most banks has declined by 20-35 percent, while the profitability of most of the banks have shrunk significantly in the H1 2020," he added.

According to a recent disclosure of Eastern Bank, the bank's loans increased by 1.73 percent to Tk23,607 crore during the January-June period of this year when compared to that of December last year, whereas its deposits decreased by 0.29 percent to Tk23,947 crore.

However, the bank recorded healthy growth of 55 percent in its investment during H1 2020, which stood at Tk6,161 crore at the end of June this year.

Another big achievement of Eastern Bank in H1 2020 was that its non-performing loans (NPL) decreased to 3.13 percent of its total outstanding loans at the end of June this year, which was 3.35 percent at the end of December last year.

Ali Reza Iftekhar said, "The selection of our clientele base has been superior to those of our peers. We have been cautious in increasing our loan portfolio but at the same time we have kept our NPL percentage as one of the lowest in the industry in H1 2020."

The bank's liquidity coverage ratio in June 2020 was 204.15 percent–far above the regulatory minimum of 100 percent and net stable funding ratio was 105.26 percent as opposed to regulatory requirement of more than 100 percent.

At the end of June this year, the bank's capital to risk weighted assets ratio was 14.67 percent against the regulatory requirement of 12.5 percent.

EBL has never been in a liquidity crunch; neither in the recent past nor during this pandemic, noted Ali Reza Iftekhar.

The bank re-emphasised its drive for low-cost customer deposit and has been able to keep the cost of deposits within a reasonable range for a decent spread at this challenging time, he added.

"EBL was one of the pioneers to be rated by internationally reputed credit rating agency Moody's Investors Service. It appreciated our effort in managing liquidity and capital so assigned Eastern Bank a B1 rating in November 2019. EBL was awarded AA+ in the long term and ST-1 in the short term by Credit Rating Information and Services Limited ," said Ali Reza Iftekhar.

He also claimed that EBL has emerged as a true frontliner during the current pandemic and has been discharging its due services to all its stakeholders.

"The bank has intensified its efforts to be in close touch with customers in serving their banking needs and processed the central bank-introduced stimulus packages faster to help businesses restart and shore up," he said.

"EBL has also introduced innovative products–like export factoring for its export customers–while its branches and ATM network have been kept open and functional for the convenience of customers during this critical time," he added.

To ensure a safe and healthy environment for its employees and customers, Eastern Bank has formed a rapid response team to address Covid-19 and followed all the relevant health protocols and guidelines and devised close monitoring of health status of all EBL employees on a daily basis.

EBL kept its digital banking journey on and, keeping customer convenience at the forefront, a lot of features and functionalities have been added to Bank's flagship mobile banking app EBL

SKYBANKING and some are in the pipeline. The bank has also taken initiative to scale up its cash management tool EBL Connect.

It is the first bank in Bangladesh to introduce e-KYC-based bank accounts known as EBL INSTA Account. This innovation is expected to allow its customers and employees maintain the maximum possible amount of social distancing during the Covid-19 pandemic and minimise total time spent by customers in the branches, sub-branches and agent outlets.

EBL's CEO also said that his bank is working closely to upgrade its Core Banking System (CBS) through which a new era of open banking platform will be available; the phase -1 of CBS up-gradation of FLEXCUBE UBS 10.5 to FLEXCUBE UBS 14.x has been rolled out, to provide EBL customers superior and futuristic services.

EBL is one of the few pioneers to have achieved Payment Card Industry Data Security Standard certification and got ISO 27001 certification. "These certifications are the testament of ensuring IT security for our customers," maintained Iftekhar.

''We want to remain healthy, not fatty," EBL's CEO said while expressing his views and strategy for the rest of 2020 and beyond.

A judicious balance sheet management, with a focus on healthy asset growth, strong collection and recovery drive, process improvements and customer convenience through digital banking, will be the key driving areas for the days to come, he concluded.