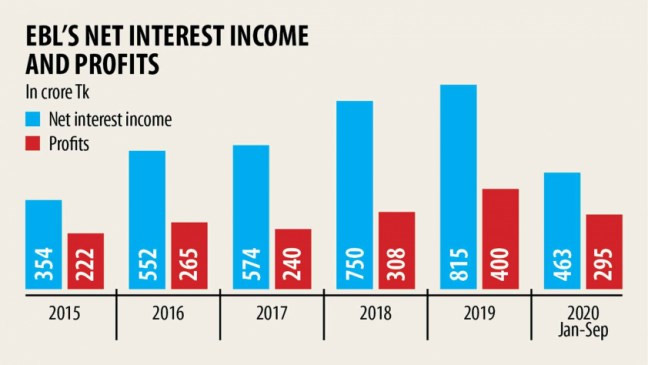 Analysis of the quarter shows that the listed lender's profits had soared 92 per cent to Tk 138.05 crore in the quarter. Similar net profit comparison of the past nine months shows that it has risen 28 per cent, well over the industry's 3.49 per cent.

The bank's profits rose riding on its higher income from stock market investments, investment in government securities, and lower provisioning.

The lender's net interest income dropped 24 per cent to Tk 151 crore in the quarter while that of the industry by 25 per cent.

Income from investments doubled to Tk 128.86 crore in the third quarter of the year.

Its provisioning stood at Tk 3.72 crore in the negative. It was Tk 58.14 crore in the same period the previous year, shows the financial report.

"We have kept enough provisioning for the January-September period as a whole," said Iftekhar.

He said the bank, which started its journey in 1992, had never failed to meet the provisioning requirement.

"In the next quarter, we will keep provision as per the central bank's direction along with our judgement for the betterment of the bank," he said.

The bank’s stocks closed 1.12 per cent lower at Tk 35.30 on the Dhaka Stock Exchange yesterday."

This year the whole banking sector witnessed profits despite the lower lending rate regime, largely because of Bangladesh Bank's policy support, said stock investor Arif Hossain, who has been involved in the stock business since 1994.

The government fixed  9 per cent lending rate and 6 per cent deposit rate for the sake of industrialisation. The rates came into effect on April 1.

The central bank allowed borrowers to defer the repayment of instalments for the current year and exempted the loans from being classified. This policy intervention helped reduce provisioning needs for banks.

Many banks will struggle next year but not good banks, Hossain said, adding that EBL had a good track record of providing handsome dividends and he was hopeful of it maintaining its performance.

British High Commissioner to Bangladesh Robert Chatterton Dickson along with Khalid Mustafiz Gaffar, Deputy Head of Trade and Investment paid a visit to Eastern Bank Ltd. (EBL) Head Office at Gulshan in the city on January 10, 2021.

EBL joins hand with Bangladesh Army as platinum sponsor of the international sports event ‘Bangabandhu Sheikh Mujib Dhaka Marathon-2021’ to be held in Dhaka on 10 January, 2021.