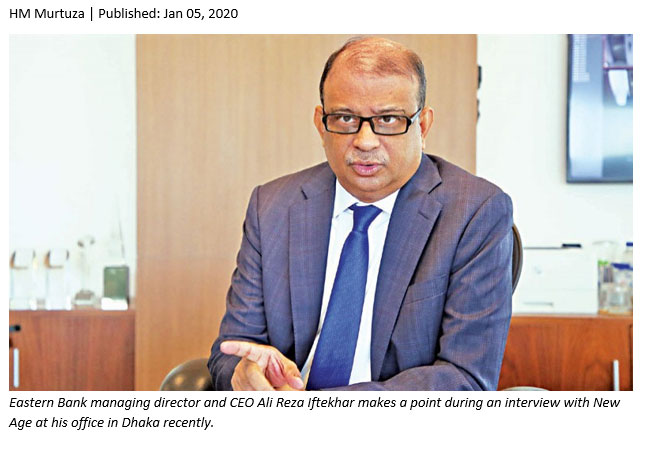 There is no magic solution to the soaring non-performing loans in the country’s banking sector, said Eastern Bank Limited managing director and chief executive officer Ali Reza Iftekhar in a recent interview with New Age.

There will have to be a three-to-five-year firm loan recovery drive to rescue the banking sector from the problem, he said at the bank’s headquarters at Gulshan in the capital.

In tandem, corporate good governance in the management and board operation of the banks must be ensured to lessen the high level of bad loans, observed Iftekhar, a banker with 34 years of experience, who has been leading the EBL as managing director for the last 12 years.

Established in 1992, the EBL is a front-ranking institution in the country’s banking sector in terms of achieving customer satisfaction and maintaining a sound financial health.

Speaking on how the bank wants to build its image among customers, Iftekhar said that the bank had aggressively been moving to keep its customers satisfied.

‘We do not want to compromise on customer satisfaction,’ said Iftekhar who won the CEO of the Year 2012 at Asian HR Leadership Award.

He intends to establish such a brand image for the EBL that customers will automatically think of this bank whenever they think of banking, he said.

To facilitate its cross-border trade, the bank has partially achieved its goal in this regard as many of the global financial institutions have started their journey in Bangladesh jointly with the EBL, the CEO mentioned.

Iftekhar, who has been elected the chairman of the Association of Bankers Bangladesh for 2020-21, a second term, after holding the position for 2014-15, has led the EBL in reaching various milestones.

Corporate banking is the bank’s main business strength as this segment generates the highest revenue for it, he said.

However, he added, the bank has also been prioritizing retail banking as a result of which it has achieved the best retail banking award for six consecutive years, reflecting its professionalism in the segment.

Although the development of retail banking takes time, the segment helps to create a positive perception about a bank among customers.

Apart from its corporate and retail services, EBL’s treasury segment is also equally active and productive, the bank’s CEO said.

The bank has subsidiaries in Hong Kong, China and Myanmar, and it has planned to open a full-fledged branch in India to strengthen its cross-border trade facilitation capacity.

While its internet banking — EBL Skybanking — is very much active, Iftekhar thinks that there is a scope for improving the bank’s digital segment so that customers can avoid physically coming to the bank unless they are required to sign any document.

Speaking about the criticism of the banking sector, Iftekhar reasoned, ‘It is very easy to criticise the banking sector and yes there are challenges, but the state of the sector is not as grave as it appears.’

He, however, said, ‘All of us, including the government, Bangladesh Bank, bankers and even the banks, are worried about the high non-performing loans in the banking sector but the problem cannot be solved overnight.’

Such a high NPL rate affects also the good customers as they too have to pay high interests due to the increased costs of bank funds, the CEO pointed out.

The reasons behind the soaring NPL rate—absence of good governance in both the management and the board function—must be looked into seriously, he viewed.

The banks should focus on ensuring governance parameter issues like cost-income ratio, advance-deposit ratio and the NPL level, the ABB chair said.

Besides, he observed, the banks’ approach to lending only on the basis of mortgage was a wrong policy.

Rather, the banks should also analyse the profitability and business potential of an organisation before issuing credit to it, otherwise borrowers will definitely default, the EBL chief executive said.

Apart from these requirements, adequate monitoring must be ensured to assess whether the borrowers are using the loans properly or not so that the banks could get back their money as stipulated.

Speaking on how the NPL crisis can be solved, the ABB chair said that there was no magic solution to the crisis.

‘If we really want to bring down the NPL rate, government support must be ensured along with relentless efforts from the bankers for a minimum of three to five years,’ Iftekhar said.

Apart from that, the banks will have to go for harsh recovery along with ensuring corporate good governance or the situation will not change, he affirmed.

‘I am not for permitting any flexibility to the willful defaulters,’ Iftekhar said.

Asked about how the implementation of the 9 per cent lending rate and allowing rescheduling of loans with two per cent down payment would impact the banking sector, the ABB chair said that it would have been better if the down payment was at 5 per cent.

‘And it would take another one to two years to find out whether it is working or not,’ he said about the single-digit lending rate.

The EBL managing director further said that the implementation of a single-digit interest rate was a big challenge.

The implementation of a single-digit lending rate was not the only means to ensure industrial expansion, he said, adding that the interest rate was dependent on the deposit rate too.

When the deposits will be available at low costs, the banks will bring down the lending rate on their own, Iftekhar observed.

‘How will the new banks implement the 9 per cent lending rate as they are not getting deposits at a 6 per cent interest,’ questioned the CEO, adding, ‘That’s why it will be challenging for the banks as well as for the government.’

‘Instead of making the lending at 9 per cent mandatory for all the sectors, we have requested the government to set sector-specific parameters to become illegible to avail loans at the rate,’ he said.

Speaking about the government’s high bank-borrowing in the recent time, Iftekhar proposed for tax net expansion so that the government could meet up its expenditures as the deficit in tax collection had resulted in the high borrowing by the government.

‘It would be better not to borrow too much from the banking sector,’ he said.

Replying to the question as to how the country’s economy has been performing, the ABB chair said, ‘Exporters are suffering due to fall in their profit margin and the government should offer extended incentives for all the exporters.’

However, the financial and economic indicators were doing well, Iftekhar said.

The remittance inflow is good due to the two per cent incentive, he said, adding, ‘The government should, however, keep an eye on inflation as high inflation would adversely impact the low-income people. It would be a challenge.’

‘The private sector credit growth has slowed down a bit, but it does not mean that the country’s economy has fallen into stagnancy,’ the ABB chair said.

‘In fact, in terms of several key parameters, including qualifying for graduation from the LDC status, Bangladesh is an economic miracle,’ he added.

We, in the banking sector, are committed to be a part of Bangladesh’s journey to prosperity and growth, he said.