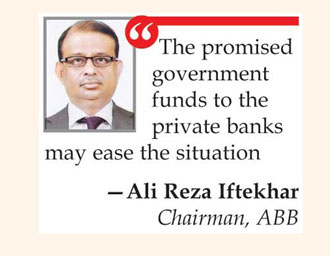 Concerns aired at meeting with BB

The country's top bank executives evinced on Tuesday their grave concern over the 6.0 per cent interest rate on bank deposits as they believe such a poor rate will be "challenging" for mobilising funds from the public.

"We've raised the issue of low interest rate on deposits in the meeting with the governor of the central bank of Bangladesh," said Ali Reza Iftekhar, chairman of the Association of Bankers, Bangladesh Limited (ABB), a group of top bankers from the country's 59 commercial banks.

He was talking to the media after the meeting with the Bangladesh Bank (BB) governor on the day.

The top bankers had a meeting with the BB governor in the city. The governor usually meets with the members of the ABB on a quarterly basis and this is the first meeting of the current calendar year.

The government has set a timeframe for introducing the 6.0 per cent interest rate on deposits and 9.0 per cent on lending effective from April 1 next. It was set to be implemented from January last. But later it was deferred for unavoidable reasons.

BB Governor Fazle Kabir presided over the meeting attended by CEOs from all commercial banks of the country.

Mr Reza said banks are ready to execute the government order. "But the issue of deposit is a matter of the people whether they will do it or not," he added.

"This [procurement of fund from people] is really a challenging task for us," he observed.

Mr. Reza, however, said the promised government funds to the private banks might ease the situation.

"We've requested the governor to resolve the issue [government fund to the private banks]," he said.

The Finance Division is now working on the issue as the banks complain that they are yet to start receiving funds at the ratio of 50:50 from the state-owned institutions.

On the other hand, Syed Mahbubur Rahman, immediate past chairman of the ABB, told the FE: "We're thinking now about our sustainability under such a poor interest rate which has been proposed."

He, however, said there are some policy measures concerning SME (small and medium enterprise) funding and the authorities may adopt the same for other sectors, especially the banking sector, to help it survive as the banking system has high costs of fund procurement.

He said the governor had asked them about progress in filing cases with court to realise default loans.

"We are filing cases analysing merits of the cases," he said.

Earlier Finance Minister AHM Mustafa Kamal assured the bankers of taking necessary steps for bringing down the deposit rate to 6.0 per cent to make sure the lending rate is 9.0 per cent.

The finance minister's assurance came following a demand made on Monday night by bankers at a reception, which was organised to honour him for being named the world's best finance minister by The Bankers, a London-based magazine.

The bankers requested that the central bank and the Banks and Financial Institutions Division under the Ministry of Finance issue circulars to this effect.

The finance minister also urged the bankers to reduce operational expenses so that the single-digit interest rate could be implemented.

"Please, reconcile with your ledger to reduce operational expenses," he said while speaking to the gathering of bankers at the Bangladesh Association of Banks (BAB) office in the city.

Mr Mazumder sought support from the finance minister to provide government deposits as promised to banks.

He said if banks get the government deposits, they can implement the 9.0 per cent interest rate.

However, Mr Mazumder, on behalf of bankers, sought an official circular to that end.